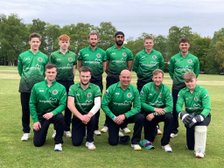 Ammanford CC Get Off to Winning Start

A winning start to the 2022 season for Ammanford CC 1st XI as they defeat to Clydach by 97 runs, following a Billy Root 100.

Ammanford have begun their 2022 season with a comfortable 97-run victory over newly promoted Clydach at Waverly Park, following an impressive century from Billy Root.

Away skipper James Garland won the toss and invited Ammanford to bat first with new signing Kurtis Marsh and Rhodri-Huw Davies pairing up to open the innings.

Marsh was soon replaced by Root with only 10 on the board, but a wonderful 172 run partnership was put on, before Davies was dismissed for 64 to set up a solid foundation for Ammanford to push on for the remaining nine overs of the innings.

Root was joined at the crease by new signing Xavier Clarke, who quickly put on an impressive 39 runs off 17 balls before the Glamorgan player scored a classy century off 132 balls, prior to Ammanford ending their innings on 271 for 5.

After the tea interval, Clydach’s openers got off to a quick start scoring 28 in just three overs. But Ammanford opening bowler Saihaj Jaspal soon got into his stride and was unlucky not to a take a wicket on his first outing for the club, putting Clydach’s batters under constant pressure with many deliveries missing the outside edge.

Dan Roberts at the opposite end had just reward for his efforts picking up the wicket of their opener Steff Davies and danger man Sam Davies caught by young wicket keeper, Gruffudd Owen, before finishing on four wickets for 36.

Ammanford 2nd XI put on an excellent run chase in the park with a target set by Ynystawe of 265, but to narrowly come up short by just 7 runs with just 10 balls remaining at the fall of the last wicket. They travel to St. Helens cricket ground next week to face Swansea CC.

St.Fagans make the visit to the park for the first home game of the season next Saturday, 7th May.

Following the game, Lampeter-based acoustic duo 'Streep' will be the evening entertainment at Ammanford CC Pavilion with free entry for the event.